We reached our southern point two days ago. Just our luck to leave Atlanta as it got sunny and warm and arrive in Palm Coast, Florida in a typhoon. Of course we will take the blame for the weather. Things improved yesterday afternoon, the ocean settled down and today we rode bikes for the first time and basked in 75 degree weather.

Atlanta was a treat as we stayed with two very dear friends and lazed the days away in their wonderful southern hospitality. As I mentioned before, Stu and Polly were on our river cruise last summer and we had promised to find a way to get back together. This march to the sea, as we are now calling it, afforded us that opportunity. While in their area we were treated to a trip to downtown Atlanta where among other activities, we came close to seeing the new Falcon Stadium. I say close as apparently its one of those things that even a navigator will tell you, “you can’t get there from here.” It seemed we were thwarted at every turn by a closed street, a one way that wasn’t our way or just a conveniently, for someone but not us, construction closure.

There was one extra treat. Stu is the owner of a Porsche and offered to take me for a scenic, quiet slow ride through the local area……I’m kidding. It was scenic and the area was quiet but slow would not be a descriptor I would use. The old cliché, it corners like it’s on rails, was proven true by Stu. As Tom Cruise would say that he had a need for speed, well my need was met and potentially exceeded but I savored every mile and every minute of it. Now, if I could only convince Deb that the cargo room in a Porshe would be as much if not more than my Jeep, maybe, just maybe. 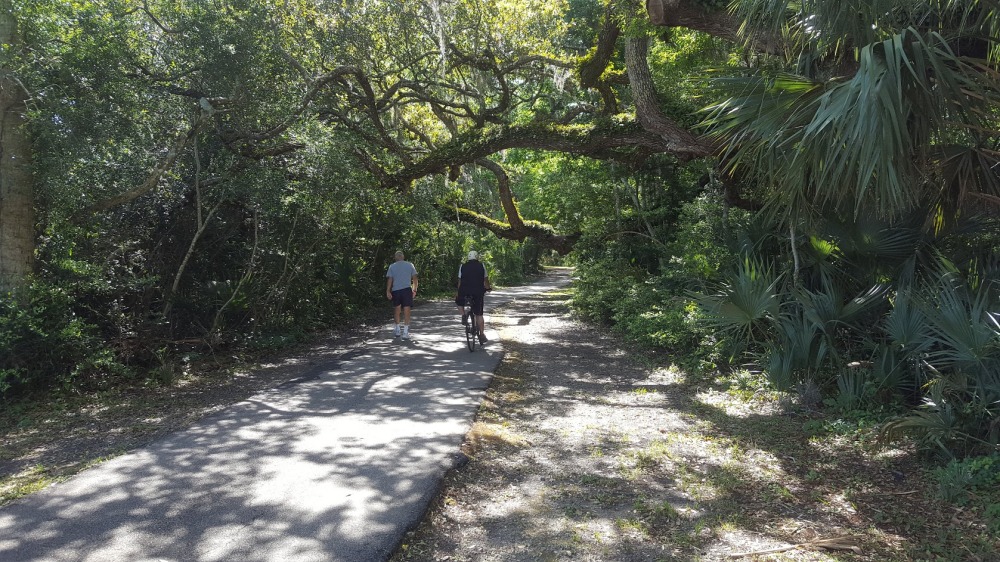 We left for Florida late on Sunday after promises that this would not be the last time we get together and that we would find some way to hold them to the promise. After managing our way through the worst traffic I have ever had the honor of driving in and wondering how this many people could be traveling in and out of Atlanta on a Sunday, we crossed the Florida Georgia line and turned east toward Palm Coast. This city is laid out beautifully along A1A, the highway that hugs the Atlantic Ocean. The Intercoastal Waterway goes right through the city and canals crisscross its streets. We managed the surf and wind of the ocean at Ormand Beach where they used to race cars before moving down the coast to Daytona. We took in John D Rockefeller’s winter home where he eventually retired and passed away. And finally, I got back on my bike for the first time since the surgery and was ecstatic that I was able to ride relatively pain free. That was a major success.

Florida has been great. The striking thing about the area is that everyone is from somewhere else. No true southern drawl and a general attitude that you can’t tell the tourist from the residents and certainly not from the snowbirds. The general conversation is when are you headed north as though there needs to be a mass exodus to get out of here before the hardcore confused tourists come down just about the time Florida reaches a million degrees in the shade.
We head back north tomorrow but will still hopefully soak in some sun and warmth on Hilton Head Island.

Till my next blog, keep working on warming up Wisconsin for our return.