I am returning from our latest journey soaring above the clouds at around 30,000 feet at a speed of 500 some miles per hour. I’ll be home before midnight and am looking forward to a night in my own bed. I’ll face the usual tasks awaiting me tomorrow morning, all the price of being gone for a week. And yet, all of it worth it. Travel in today’s world is relatively easy, save for the hours spent in airport terminals, standing in line for the TSA check in or just lounging about waiting for your flight to board. Oh, and let’s not forget the general disrobing to get through the TSA process. But I am flying safely knowing that no one on board has more than 3 ounces of anything and that their shoes have been cleared of any lethal devices.

Our trip began last Monday at oh four thirty with our ride to the local airport. Seven and a half hours later we were retrieving our bags in Reno, Nevada. I had been invited to a three-day conference dealing with my volunteer retirement gig with SCORE. Deb, and I had decided to extend our stay so that we could see more of the area than the inside of the Atlantis Casino and, to give my two California sisters a chance to visit with their favorite brother, my estimation. I knew little about Reno other than its location on the eastern edge of the Sierra Range and that it was hot and dry. Why is it that everyone always touts the comfort of heat when it’s dry air? Seared must be somehow more comfortable than boiled. Regardless, Reno is a quite attractive alternative to the bright neon overkill of Las Vegas. You can still gamble your time away but in a smaller more picturesque setting. Footnote here, I didn’t gamble, I left that to my sister who apparently came close to bankrupting the casino, her estimation.

The conference was surprisingly educational, and I enjoyed the host of people I met and networked with throughout the three days. It seemed we had a lot in common. We were for the most part, retired and dedicated to giving back our wisdom to the clients we mentor as well as trying to find ways to grow our chapters to help even more startup companies improve their odds of survival. As it ended, I felt energized and ready to tackle phase two of our mini vacation.

Reno’s history lies in its proximity to the silver and gold fields of the Sierra Mountains. Situated at the head of the Owen’s Valley and on the banks of the Truckee River, it was in the ideal place for the vast shipments of gold and silver coming out of the mining towns. Close to a billion tons of the ore was pulled from the mountains to be processed into gold and silver bars in the late 1800’s. One such mining town sending down its bullion, was Virginia City. Remember the 1960’s show, Bonanza, that Virginia City. Before you get excited, the actual filming, as is the Hollywood style, was done miles up the mountain range at Lake Tahoe. But then we came for the history and not the glitz of fake reality. Virginia City did not disappoint. 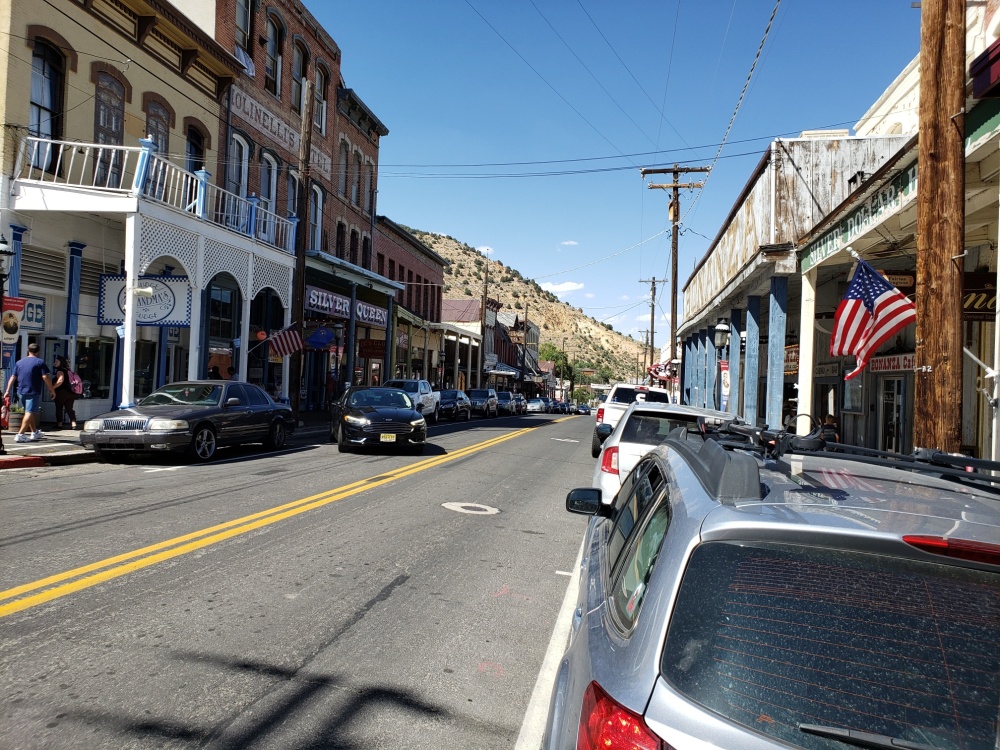 After surviving a very cool antique car museum tour the day before that lasted four hours as our guide virtually insisted on giving us the facts on all one thousand four hundred cars the museum had collected, we started our Virginia City visit with you guessed it, another tour. 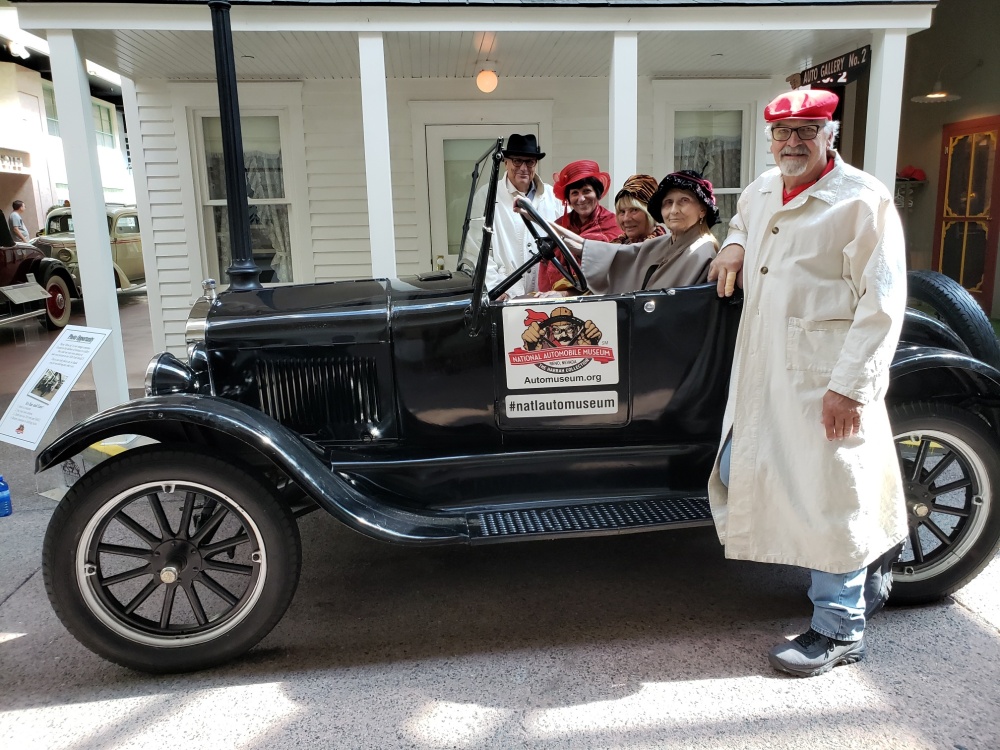 Deb, after suggesting the previous tour only to abandon us after three hours, seems she couldn’t take it, decided we should do another. With trepidation, Deb, I and my sister Karen along with her partner Larry, chose the Fourth Ward Schoolhouse from the host of museums and tours available. After all, we were teachers and this building went up in 1876 just after the Virginia City fire of 1875. That date qualified it as the historic and exactly what we were seeking. I will confess that Deb had made a good choice. The schoolhouse was full of Virginia City history, artifacts and incredible pictures as well as actual documents and bills of lading from the time of the city’s heyday. We forgave Deb for her indiscretions of the previous day and credited her with a great choice of starting points. Besides, this tour only took us an hour and a half. Either less information or we had learned to all read and browse faster.

Having satisfied our need for background, we now sought nourishment, both solid and liquid. Next stop, one of the many saloons that lined main street. We had our choice of at least ten such establishments with names like The Red Dog Saloon, Bucket of Blood, The Red Garter and the Delta. For some still unknown reason, Deb was especially drawn to the Bucket of Blood and this a woman who considers mean words issued in a film immediate cause to put it on her not to be seen list. We settled on none of the above and wound up in an unnamed establishment with good food, air conditioning and a terrific view, “one-hundred-mile view” according to the sign out front. Not surprisingly, three boot hill style cemeteries occupied the first mile of that view. This was our reminder of the rough life of the miner in the Old West. They ironically spent huge amounts of their time underground only to end up underground at the end, many before their time.

Having satisfied our growling stomachs, we began our saloon tour. The Red Dog offered us the “suicide table”. It seems the first three owners of that gaming table had all committed suicide. No explanation of why, just the painfully obvious statement that a fourth owner wisely never materialized and thus the gaming table is now an oddity on display in a dark corner of the saloon. Next stop, The Bucket of Blood Saloon. Here we learned the history of the wealthy Bower family who owned and ran the saloon. Business must have been good as the owners resided in the biggest mansion in town. Did I mention prostitution? Well it existed and was one of the more lucrative businesses in town, but because Virginia City was booming and, in an effort to attract a higher class of citizenry, it was relegated to its own part of town. Hats off to the Town Council, who knowing where they placed it, were likely its best customers. We finished our saloon portion of our self-guided tour at the oldest drinking emporium in Virginia City, The Washoe Club. Placed conveniently next to the biggest bank in town, and home of the Washoe Millionaire’s Club, they were the only saloon to survive the Great Virginia City Fire. No surprise that with a bank holding the majority of all the gold and silver taken out of the surrounding hills, the backfire, an effort to control the inferno, was started just to the other side of their street. Reviewing our pub crawl through town, we declared it well done, our estimation.

Our final push to fully explore Virginia City was aimed at the fascinating shopping experience offered through the myriad of eclectic shops. With that accomplished, we bid farewell to the area and headed back down the serpentine highway to Reno. We had come for the history and left feeling we had been able to experience some of the Old West’s flavor through the preserved buildings and the very well chronicled story of their past glory. You leave Virginia City with a better perspective of the role of the silver and gold rush of the 1800’s. It created the need to tie the West Coast to the rest of the country, opened the west to settlement and brought the railroads west with that expansion. The history books will tell the tale of the expanding and adventurous nature of our country, but we must never forget the cost of that expansion as we moved the Native American Tribes off their ancestral lands and onto the many reservations. It is easy to think of our ancestors as glorious explorers, but we owe a debt to the people whose lands we seized.

I will end my narrative with my fantasy. Whoa, not that kind of fantasy. Whenever I am viewing living history, my fantasy is that I would love, just for a period of time, to go back and walk the streets, to see the colors that are missing in those beautifully preserved pictures, to rub elbows with the inhabitants and to experience for myself what it was like to live back then. No electronic conveniences, no fast transit systems, in most cases very few conveniences at all. A less stressful, simpler, all be it, difficult time. A time of true adventures, unlimited opportunities and a vast country open to a future they could only imagine. Virginia City did a nice job of getting me as close to the fantasy as they could without offering me the time machine to experience it firsthand. Of course, had they sent me back, God only knows how long I would have survived.