I was involved in a discussion recently that reminded me of a story. Two stories in fact. The discussion was about the two different approaches people will take when seeking assistance. But let me tell the stories first.

The first story involved my daughter and I. We were traveling out to California for a family wedding. To get where we needed to be, we had to fly into Las Vegas and then travel by rental car across the desert to my sister’s home located between two mountain ranges in California. That by the way is a story to be told another time. I had reserved a room on-line in a Vegas hotel and found my daughter and I in the lobby of the hotel just before midnight. We stepped in line behind two women who were traveling together, and like me had not only reserved their room, but had prepaid for it. They were now in a heated argument with the only hotel agent available at this time of night. Their discussion, more than lightly laced with expletives, centered around their demand for a room other than the one they had already paid for. With a little eavesdropping, the conversation was loud enough that it was almost impossible not to eavesdrop, I picked up that though they had prepaid for the room assigned to that offer, they wanted a room that was larger and offered a view of the Vegas Strip. To make matters worse, they were demanding that they would get this upgrade for the same price. The agent was attempting to explain to them that there was nothing she could do as the offer they had paid for was through a third party. The bottom line was that they didn’t care, were unwilling to listen and had now decided to blame all of their problems on this poor agent. After what seemed like an unbearable amount of time and with the line behind us growing exponentially, a second and third agent were called in to pick up those of us waiting patiently, well reasonably patient. As I stepped up to the new agent, I leaned across the desk and said how bad I felt for the poor agent still being harangued by the two women. “No one deserves that kind of treatment.” She gave me a wink and then said just loud enough that the arguing women would hear, “I notice that you are staying with us for one night and reserved a room through our front desk. It appears I will be able to upgrade you at no cost to one of our nicer suites.” With that we were quickly registered and given the room key to a very nice three room suite on one of the upper floors with a view of the Strip brightly lit up below. My only chagrin was that I was sharing this lovely suite with my daughter as opposed to my wife who was forced to stay behind to cover her teaching duties. We had a good laugh about how most of the amenities would be wasted on us but were none the less impressed with our treatment. 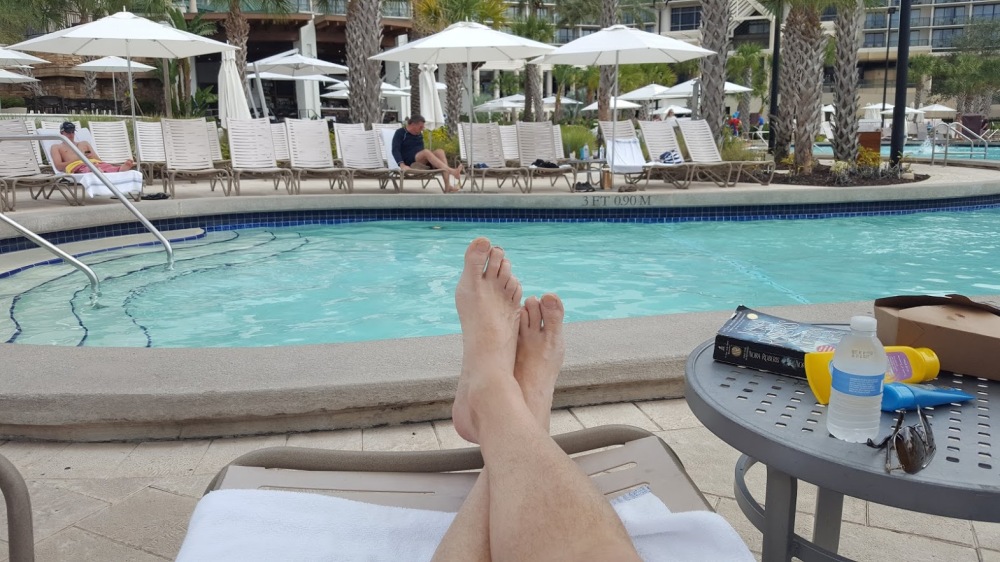 Before I drive home my point, there is a second story. Last winter, my wife and I had decided to take off for a quick jaunt down to Florida for a brief four day get away. I had again reserved a room, along with our airline tickets, at the Marriott World Resort. Upon arrival, we checked in at the front desk to get our key. The young man waiting on us pointed out that the room was actually booked through a third party and that we were subject to the rooms set aside for that company. He pointed out that they would all be on the lower floors and could only offer a stunning view of the back of the resort and the parking garage. Believe me, at this point my earlier Vegas experience clawed its way back from the recesses of my memory and into my frontal lobe. I had a choice. I replied that I now understood my predicament and that it would be alright. I would chalk it up to lesson learned. What happened next surprised us both. The agent asked what had brought us down to Florida? We explained that we had both just retired, had gotten restless and with winter crushing us, just needed a change of scenery. His response was that he was going to check on any available room and then get cleared to upgrade us. The result after a brief five minute wait, a spacious room on an upper floor complete with a balcony and a view of the pools and surrounding gardens. No additional charges were levied and he then asked if we would prefer a bottle of red or white wine as a show of appreciation for choosing their hotel chain.

Now by this point you are thinking I am either an awesome negotiator or the world’s luckiest traveler. The truth of the matter is that I am neither. What I learned from my Vegas experience and that I have always known to be true is that you get a lot better service when you earn it as opposed to when you demand it. All too often I have witnessed the irate customer taking out their frustration on the one person least likely to have the authority or ability to do anything about it. I have been in a service career of one type or another all of my life and I know how much more likely it was that I would go the extra mile for someone who had earned it. When I find myself on the receiving end of service, I try to make sure I am at least attempting to earn good service. If the two women in Vegas had only considered their position, they too might have received an upgrade instead of even steeper resistance by the agent dutifully following the rules. They chose the gripes of wrath instead of a spoonful of sugar and for all I know are still arguing with the agent to this day. Okay, that might have been an exaggeration. If my wife and I had chosen to demand a better room of the Marriott, I am positive we would have spent our four days admiring our view of the parking garage while sipping our complimentary can of soda. Don’t get me wrong. I am not guaranteeing you an upgrade or a ticket to the promise land just for not complaining. There’s always the Gripes of Wrath if you enjoy going down that rabbit hole, but just consider how much better you and everyone else will feel with a little civility. Choose wisely the next time you have the chance. Parking garage or balcony overlooking the pool might just be the result.